Let me tell you about one of my current journeys into the mysterium tremendum.

Slightly more than two years ago, I read Kathleen Norris's book Acidie & Me: A Marriage, Monks, and A Writer's Life.  I met Kathleen in the 1990's, after reading her first book of essays, Dakota: A Spiritual Geography, which captured the ethos of the Great Plains of the United States, my ancestral home.  I invited her to come to the Candler School of Theology at Emory University (where I was then serving as dean) to lecture.  She is a delightful person and a splendid writer and poet. Since then, I have read each of her books and followed her journey into the Catholic tradition. (I will write more on my styling myself an Anglo-Catholic Methodist in a later post.  Let me just say now that I have learned through my journey that my understanding of the Christian faith must root itself in the early church writers of the East and West, often called the patristics.)

Acidie & Me opened up for me the early church's understanding of the eight thoughts and that has led to a long and delightful journey which has nurtured me spiritually.  Nurtured in the Egyptian desert by the first Christian monastics, in the West the eight thoughts would become the seven deadly or cardinal sins (by action of Pope Gregory I in the 6th century CE).  In the East, the eight thoughts became the foundation for hesychasmos, the stillness of the heart achieved by God's grace through prayer. St. Gregory Palamas – monk, bishop, and theologian of the 14th century CE – moved hesychasm to the center of Orthodox prayer life with his brilliant defense and explanation of the practice. Next year, when I have a four-week quadrennial leave for spiritual renewal, I intend to gather what I have learned about the eight thoughts into a short book for study in my church.

Let me give you an outline of the pathways Kathleen opened for me.  She got me to read Sr. Mary Margaret Funk's Thoughts Matter which in turn led me to Fr. Gregory Fruehwirth's Words for Silence and Christopher Jamison's Finding Happiness.  Sr. Funk's and Fr. Fruehwirth's books led me to John Cassian's The Institutes and The Conferences.  Cassian led me to Evagrius Ponticus's The Praktikos and Chapters on Prayer, Sr. Benedicta Ward's translations of the apophthegmata of the desert ammas and abbas (The Sayings of the Desert Fathers in particular), and the writings of Fr. Gabriel Bunge (Dragon's Wine and Angel's Bread: The Teaching of Evagrius Ponticus on Anger and Meekness and Earthen Vessels: The Practice of Personal Prayer According to the Patristic Tradition).

Along with many other books read because of Acidie & Me, about five weeks ago I got around to reading The Jesus Prayer by "A Monk of the Eastern Church".  First published in 1948 in a series of articles in a French journal, Irénikon (a periodical the Roman Catholic Benedictine monks at Chevetogne, Belgium, who have long celebrated both Orthodox and Roman Catholic liturgies as a part of their daily life), the little book has led thousands to the practice of the Jesus Prayer.  (More on the Jesus Prayer in a later posting, as well.)

My copy of The Jesus Prayer was published in 1987 by St. Vladimir's Seminary Press in the U.S. with a learned and loving foreword by Bishop Kallistos Ware.  Bishop Kallistos provides a brief helpful biography of the author, Father Lev Gillet, an French Orthodox monk and priest in the foreword.

The book captivated me.  It combined a irenic and ecumenical spirit with profound learning and scholarship.  It prompted me to learn more of this Lev Gillet (1893-1980).  Happily, the Fellowship of St Alban and St Sergius, founded in 1928 to facilitate conversations and understanding between the Orthodox and Anglicans, published an English translation of the only biography of Lev Gillet, written in French by his long-time friend Elisabeth Behr-Sigel and published in France in 1993.

Last week, I finished Lev Gillet: A Monk of the Eastern Church, and, because Father Lev so deeply explored the mysterium tremendum, I plan to share my thoughts about him and his extraordinary life over a series of posts in the next few weeks.  I have found six other books he wrote in his lifetime and have added them to my library.

He is not well known in part because he fulfilled his lifetime wish to live a fully monastic life of kenosis (emptying of self).  He wrote about this vocation in an early letter Behr-Sigel quotes:

"The more I examine myself, the more I see that a life devoted to constructing and organising, a life which produces positive results and which succeeds, is not my vocation – even though, out of obedience, I could work in this direction and even obtain certain results.  What attracts me is a vocation of loss – a life which would give itself freely without any apparent positive result, for the result would be known to God alone; in brief, to lose oneself in order to find oneself." (Behr-Sigel, 9)

Committed to losing himself in a vocation of loss, he wrote little, and much of the little he did write, he originally published anonymously.  He lived simply, able to pack all of his possessions in a small, rather shabby suitcase.  He earned his way with secular jobs.

And almost everyone who met him found him to be a gateway to the mysterium tremendum.  Not that he was graceful, comely and warm and cuddly.  He could be charming.  He was always incarnationally present with others; always there with anyone with whom he was in conversation.  Yet according to those who loved him, he was also often difficult, moody, irascible, and short-tempered.

He remained open to God, however.  And, just as he was, God apparently shined in him.

He has captivated me – or perhaps it is more accurate to say God has captivated me through him – and I want to share what I have discovered through this blog in the weeks ahead.
Posted by Pastor Kevin at 7:54 AM 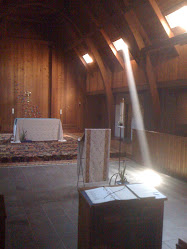 Pastor Kevin
I am a United Methodist pastor serving in Des Moines, Iowa. Originally trained as a lawyer, I practiced law for four years before starting seminary. Since seminary and ordination, I have served rural, suburban, and urban congregations and spent 14 years as an administrator in higher education. My prayer life is anchored by twice yearly one week retreats at an Episcopal Benedictine monastery.